What happens to the library?

It has hardly escaped anyone that the library is currently undergoing a facelift. The renovation, which started in January, has recycling and restoration as its watchwords. At the same time as modernizing, it has been important to maintain the building's unique values. 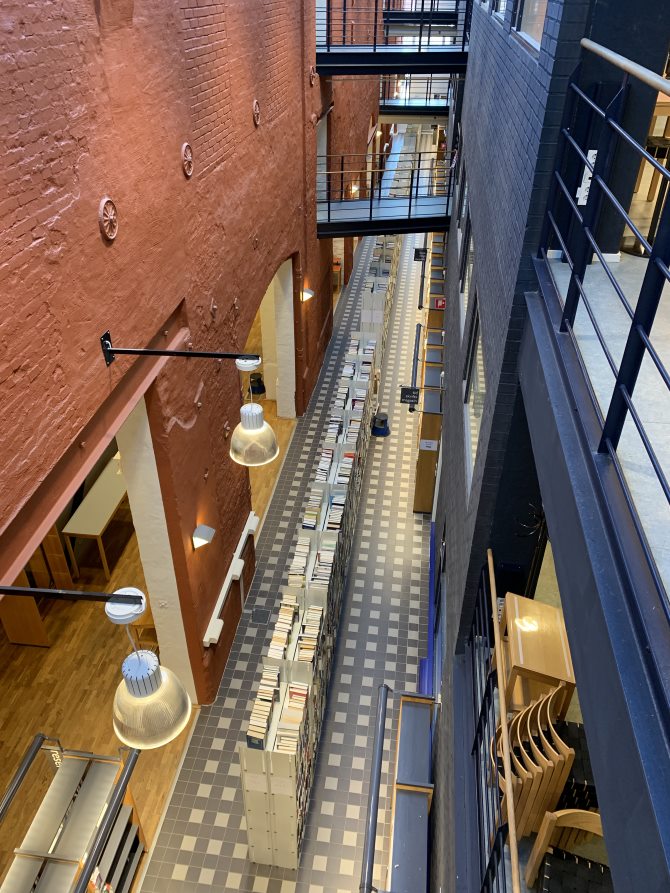 Temporary shelves in the library during the renovation.

The renovation is in its final part and right now the books are on temporary bookshelves in the corridors when the floor is sanded and the old shelves have been dismantled and they have also been sent for sanding.

- For us, it has been important that instead of buying new, take advantage of and reuse the old. Much of the interior design both in the library and in other of the university's premises is specially designed for us and of high quality. With a little sanding and care, we get them back in new condition, says Jenny Hedberg, librarian.

The library's industrial feel is preserved, but with more textiles, a cozy feeling is created at the same time as it has a sound-absorbing effect. Some new furniture is bought while others are dressed.

After the renovation, there will be slightly more study places, but the biggest change is that there will be more variation in the furniture.

- There will be new types of seating, including more seating groups, says Erica Gramming, librarian.

The first impression of the entrance will be more welcoming, the computer seats will be moved into the room and replaced by a lounge. The information desk gets a new design and it is also moved into the room to provide a better flow and facilitate longer guidance conversations with students.

The newspaper room gets a new design to be used in various contexts and events, without having to disturb the study in the library and the glass wall towards Caffé Dallucci is opened up.

An overall approach has been taken to the renovation, which has meant that ventilation systems and ceilings have also been replaced.

- Of course it has been a bit messy at times, especially when the floor was sanded, but the students have continued to come so you realize that the study environment here is important, says Jenny Hedberg.

The renovation is expected to be completed by the start of the autumn semester and on 19 September the official inauguration will be held in a festive manner. In connection with the inauguration, the library will celebrate its 25th anniversary and several lunch events will be held during the week.